how we turned the ship around

Set in 2029, Assembly for the Future – part of Bleed festival – invites thinkers and artists to address an Australian audience in 2020 to let them know what the future holds.

ON OCTOBER 19 I WAS INVITED TO PARTICIPATE IN ‘MEN OF LETTERS‘ in Sydney – an occasional departure for the wonderful women of letters team. Ten of us were invited to write a letter to a woman who changed our lives. This was mine.

Failing the climate: senate speech on the CPRS

Senator LUDLAM (Western Australia) (1.17 pm 24 November 2009) – I rise to add my remarks on the Carbon Pollution Reduction Scheme Bill 2009 [No. 2] and related bills with a sense of deja vu, because we were here a couple of months ago debating not just the same bill that we are now confronted with but, evidently, we are debating a bill that has been made substantially worse as a consequence of the horse-trading and deals that have been going on behind the scenes.I would like to acknowledge that we have been joined by a couple of school 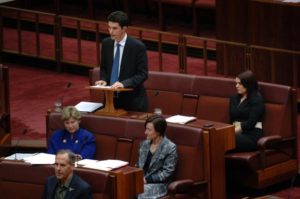 I’m the fifth Greens Senator that Western Australians have despatched to Canberra. Four strong women led the way in here, which is a wonderful political lineage.